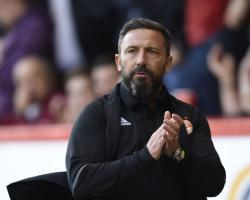 The Dons boss spent seven years at Cappielow during his playing career and is relishing the prospect of coming up against Jim Duffy's Championship team next month.

McInnes said: "When the Old Firm are in the draw along with a team from the Championship, we probably all want the Championship team - but Morton probably wanted us as well, I would imagine.

"But that is with the greatest respect to Morton because they are my club really.

"Some of my fondest memories in the game have been there and I have got a huge attachment to the club so I am so pleased that they are in the semi-final and pleased for Douglas Rae and Jim Duffy down there.

"Lots of my friends are Morton supporters so I am delighted I will get the chance to put myself up against them, but that will be a tough game."

Aberdeen booked their place in the last four with a last-gasp win over St Johnstone, Adam Rooney's 90th-minute header separating the sides after a tight contest at Pittodtie.

"But it is fine lines because a few minutes earlier, Lewis pulled off the best save of the game

Even when he touched it, we thought it was in because the ball came off the inside of the post.

"Then Rooney scored with a great header and there was no time for us to get back in the game so it was a real killer blow for us.

"We put a lot into the game and I thought we deserved extra time because Aberdeen might have had more pressure but I don't think Zander Clark has had to make a difficult save the whole game."